You are here: Home / ADHD Strategies / Make up Your Mind Already! 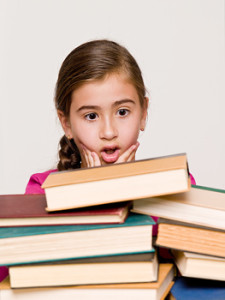 Every kid does certain things well and other things, not so well. I used to think that decision-making just wasn’t Lesley’s thing.
Somewhere I had read that a parent should give choices where the decision’s outcome solely affected the child. Would you like orange juice or apple juice? Do you want your sandwich cut into triangles or rectangles?

Lesley never took these choices lightly. She pondered the benefits of pulp-free, calcium-fortified orange juice, and she finally concluded that sandwiches cut into triangles tasted better. As decisions became more complex, she thought harder and harder about pros and cons of each one.

Which book should she do her report on? What topic would be best for the upcoming research paper? Her decision-making process exhausted me. “What do you think?” she would ask.

“It’s entirely up to you, but let’s talk about it…”

It wasn’t until years later when I was chatting with Kayla that I came to realize that many children diagnosed with ADHD-inattentive have trouble making decisions.

An impulsive child doesn’t usually think about consequences – when he does, stopping to consider a logical sequence takes lots of time. If I do it this way, it means XYZ, but if I do it THAT way, it means ZYX. Then again I could…..etc., etc. Thoughts come fast and furious, and rather than organize or process those thoughts, the ADHD child may postpone the decision to another day. And then another….

Analysis paralysis. Getting stuck on reasoning without reaching a logical decision can be very common. A child who’s socially awkward may be afraid of making a mistake. What if everyone thinks I’m stupid for picking this activity? What if I offend someone by choosing the wrong thing?
Then what?

So how can you encourage your child to progress past analysis paralysis?

1. Pros and Cons. Every decision has positive and negatives. Ask your child to write them down and should the points be equally distributed, you may need to ask questions about which of the points mean more to your child.
2. Make it loud. For Kayla’s Joe, he processed out loud. He kept talking until the solution was obvious. He knew it when he heard it.
3. Give a deadline. Procrastination doesn’t help anyone, but it’s the ADHD child’s worst enemy. Teachers give deadlines, and that works well. Why not parents?
4. Give ownership. Allow your child to make the decision herself even if you don’t agree with it. It will affect him more than anyone else. Advise but don’t manipulate.
5. Brilliant conclusion. Whatever decision your child makes, accept it. Your confidence matters.

Decision-making is another life skill every adult depends on. While it may seem easier to make certain decisions yourself, that approach can handicap your child. Keep smiling, listening and encouraging. Before long, you’ll find that your reluctant decision maker will gain confidence and reach very logical conclusions more often than not.

Kayla Fay is a freelance writer and the mother of four boys, three of whom have been formally diagnosed with the inattentive type of ADHD. When she started “Who Put the Ketchup in the Medicine Cabinet?” in 2002, her sons were ages 8 through 14, when her life was a “progression of dirty laundry, lost homework, misunderstood Algebra, and a whole lot of love and fun”.